Once you're in game and have control of your character, you should be able to use the , and . keys (the same keys as SR4) to adjust the radio. You will get no on-screen visuals, but trust me, you'll hear it!

Using RadioSwapper
RadioSwapper lets you use different songs on the in-game radio. You have to use RadioEnabler for this to have any effect at all.

These instructions will show you how to import music from Saints Row IV's "The Mix" radio station.

To do this, we must do the following:

Before you start, you will need my Saints Row IV/Saints Row: Gat out of Hell tools to be able to extract the audio for other radio stations. Go download them from https://www.saintsrowmods.com/forum/threads/minimauls-saints-row-iv-and-gat-out-of-hell-tools.3188/. You'll need the "Extra requirements" listed in that post - both ww2ogg.exe and revorb.exe.

Once you have the tools extracted and have added the extra requirements, your tools folder should look like: 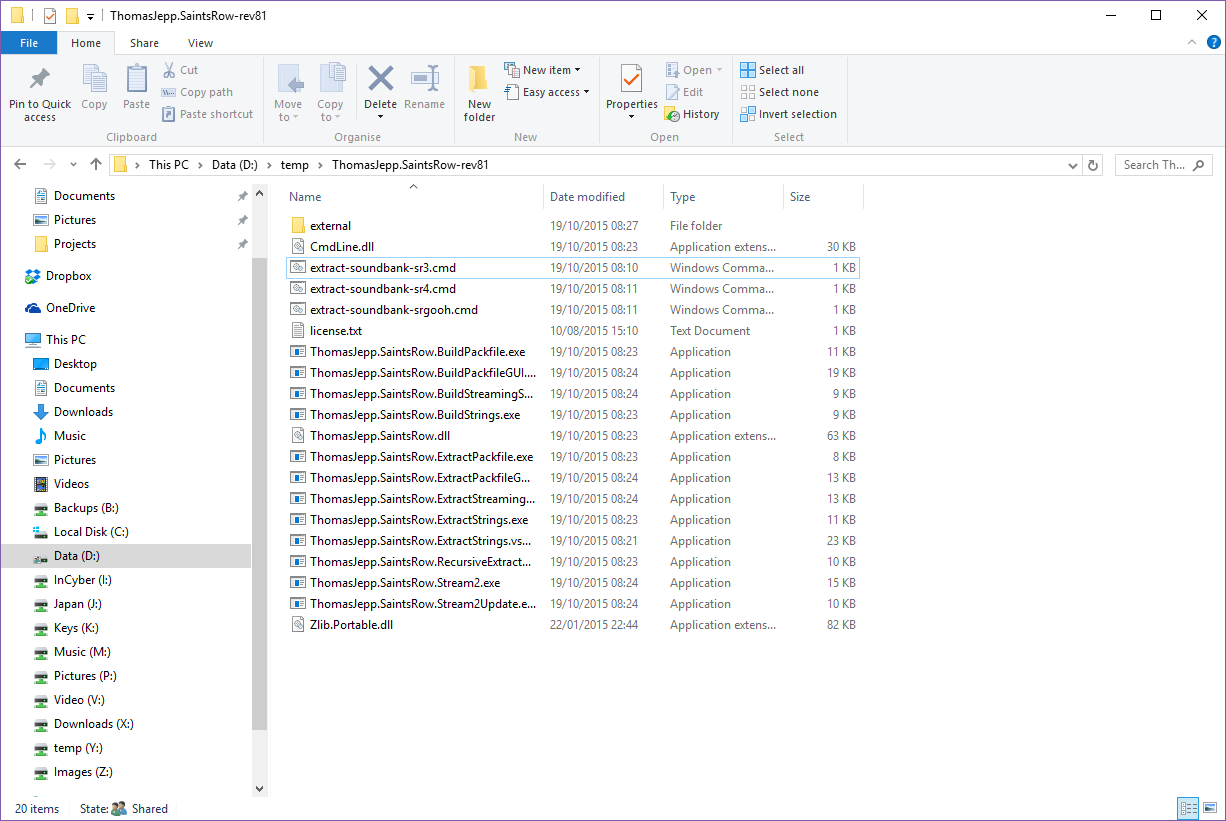 First, we must extract the packfile "sounds_common.vpp_pc" from Saints Row IV.

Go to the tools folder and run "ThomasJepp.SaintsRow.ExtractPackfileGUI.exe". 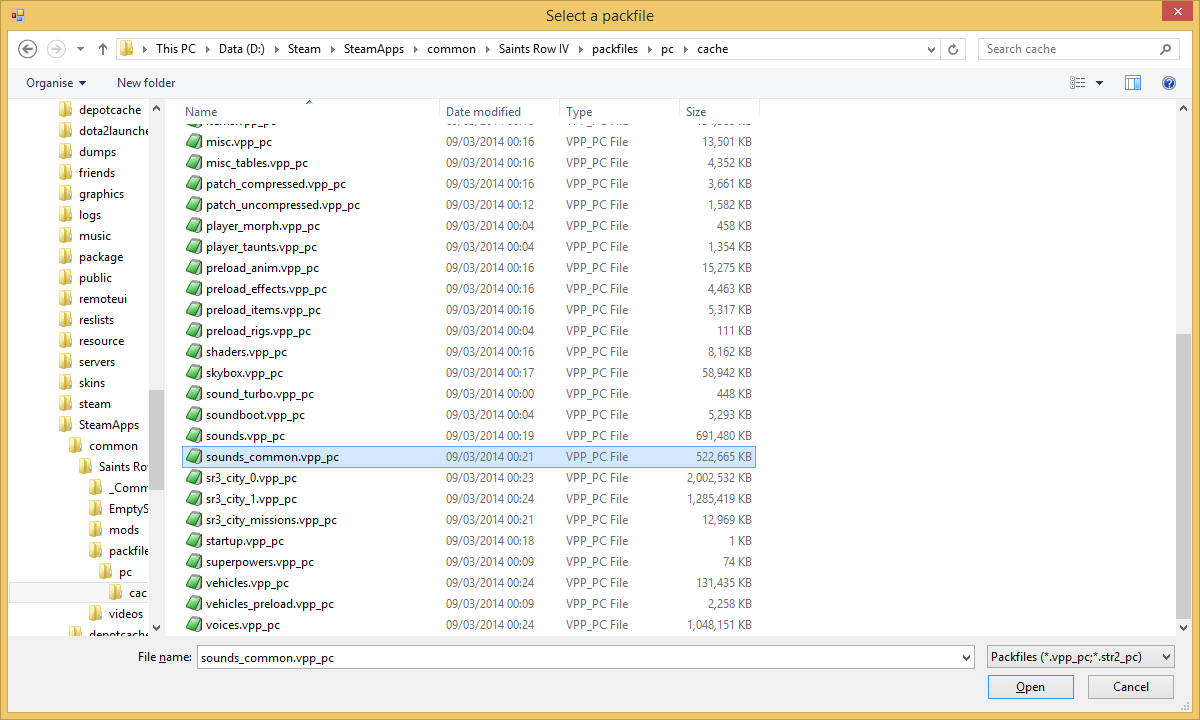 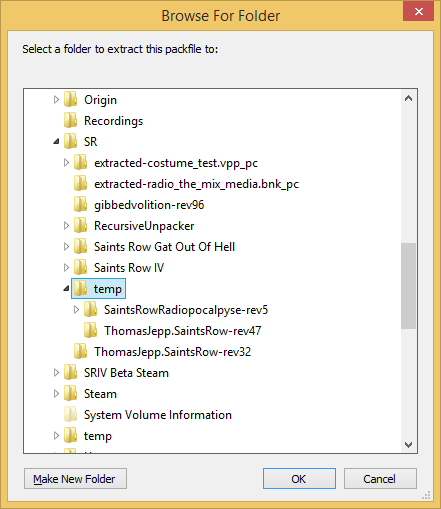 Browse to the folder you'd like to extract "sounds_common.vpp_pc" to, and click "OK". It doesn't matter where you extract it to for now, just make sure you remember where!

The packfile will now be extracted. Once it's done, you'll see:

Close the program by clicking the X at the top right.

Open the folder containing the extracted files. It should look like: 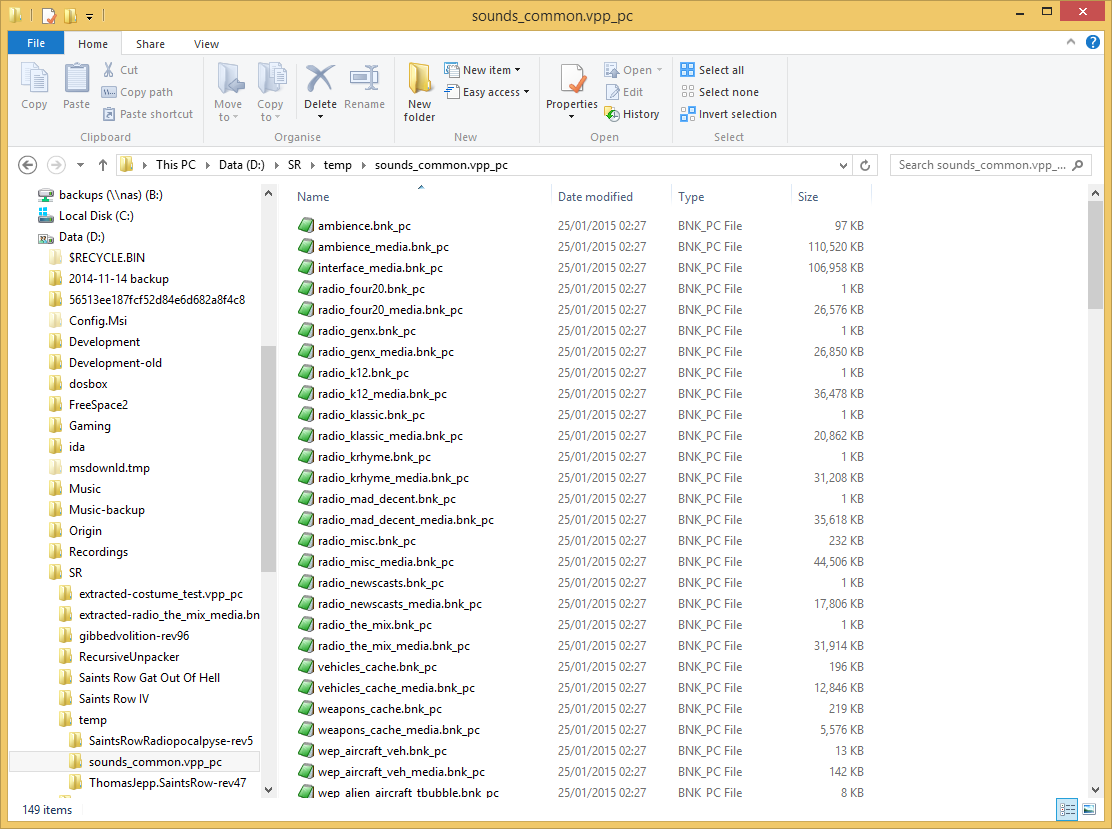 2. Extract the music tracks we want to use

We will now extract the soundbank containing the audio we want to use. The soundbanks we are interested in are the ones that start with "radio_" and end in "_media.bnk_pc". For example, SRIV's The Mix's soundbank is called "radio_the_mix_media.bnk_pc".

To extract the soundbank, select the one you want to extract and drag it on to "extract-soundbank-sr4.cmd". You'll see a command prompt pop up. It will extract the audio files and also convert them to a form you can listen to in most media players (if you can't play them on your PC, try VLC). 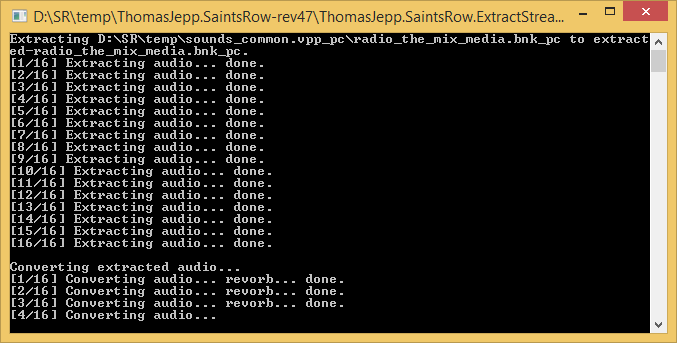 Once it's done, you'll see a new folder - in my case it's called "extracted-radio_the_mix_media.bnk_pc". This folder contains the extracted audio: 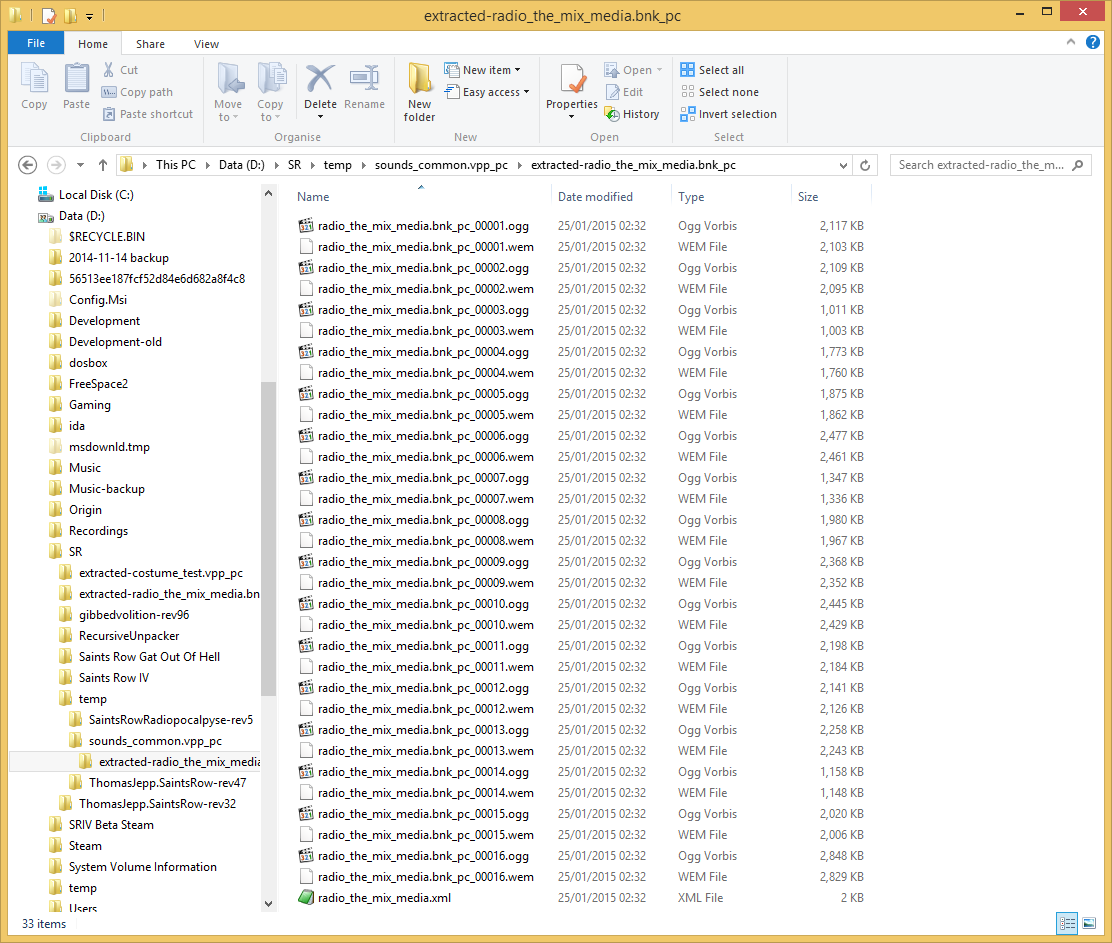 The file ending in ".xml" is a file you could use to rebuild the same soundbank - you can totally ignore this file for this tutorial.

Now that we have some extracted audio, we can move on to the next step - importing it into Gat Out Of Hell.

3. Choose the tracks we want to replace

To import the audio into Gat Out Of Hell, we will need to use RadioSwapper. Go back to the extracted files you downloaded from this post and open the "RadioSwapper" folder - you'll see: 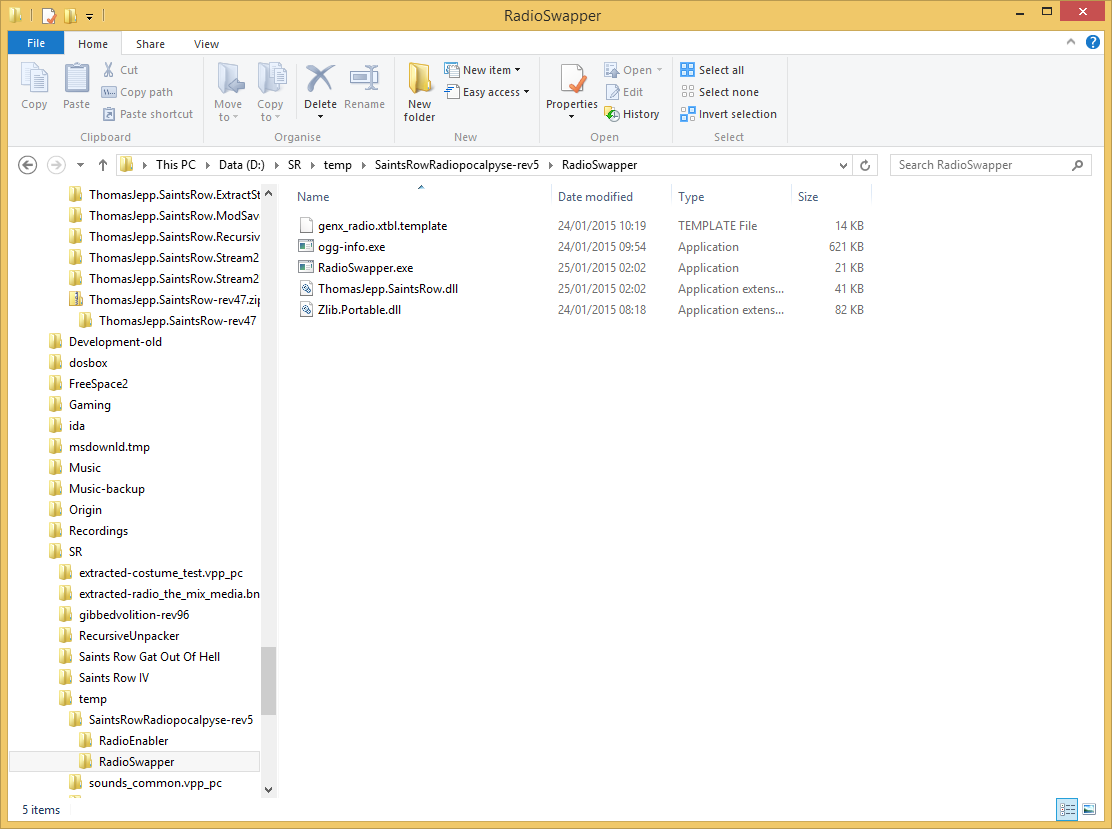 This window lets you choose the track you want to use in this slot.

To choose a track, click "Browse". Browse to the folder containing the tracks you want to use: 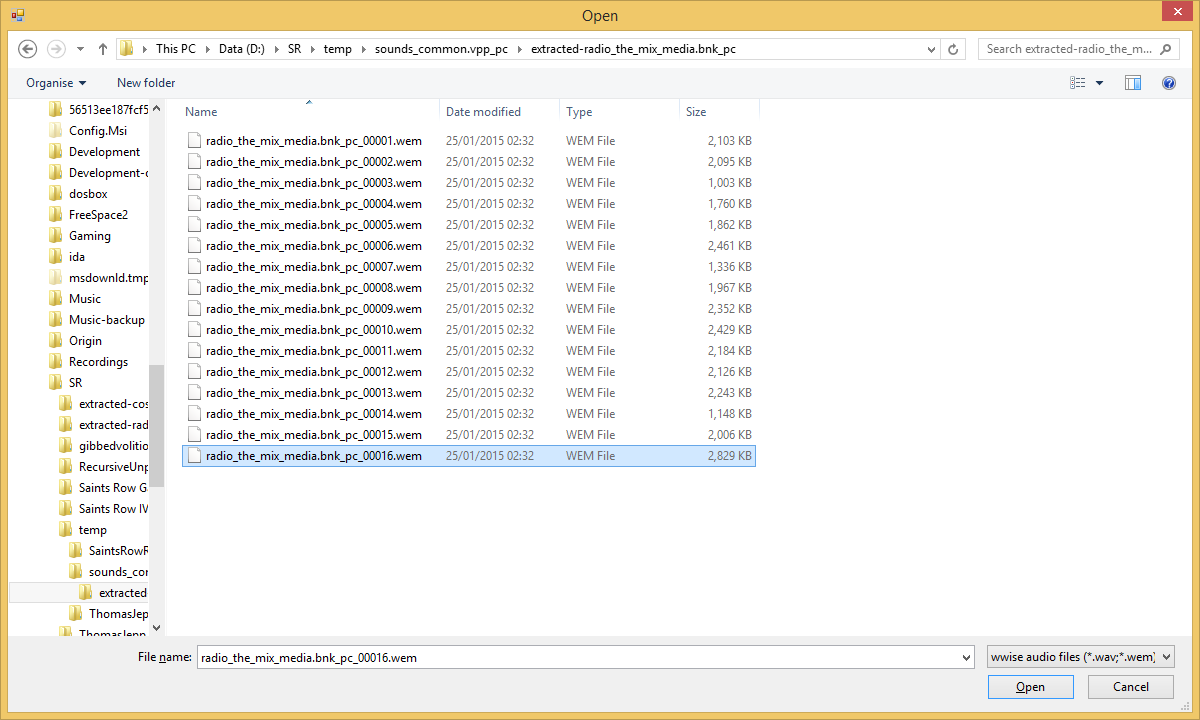 If you're happy with the track you've selected, click "OK".
If you've made a mistake, just click "Cancel" and try again.
If you want to use the original track that Gat Out Of Hell came with in this slot, you can click "Reset".

Repeat this step for each of the other slots.

After filling in each slot, my main window now looks like:

This will build your replacement soundbank for Gat Out Of Hell. Once it's done, you'll see:

Click OK. You can now close RadioSwapper by clicking the X at the top right.

A new "out" folder will now be in the same directory as RadioSwapper.exe. It should contain the following files: 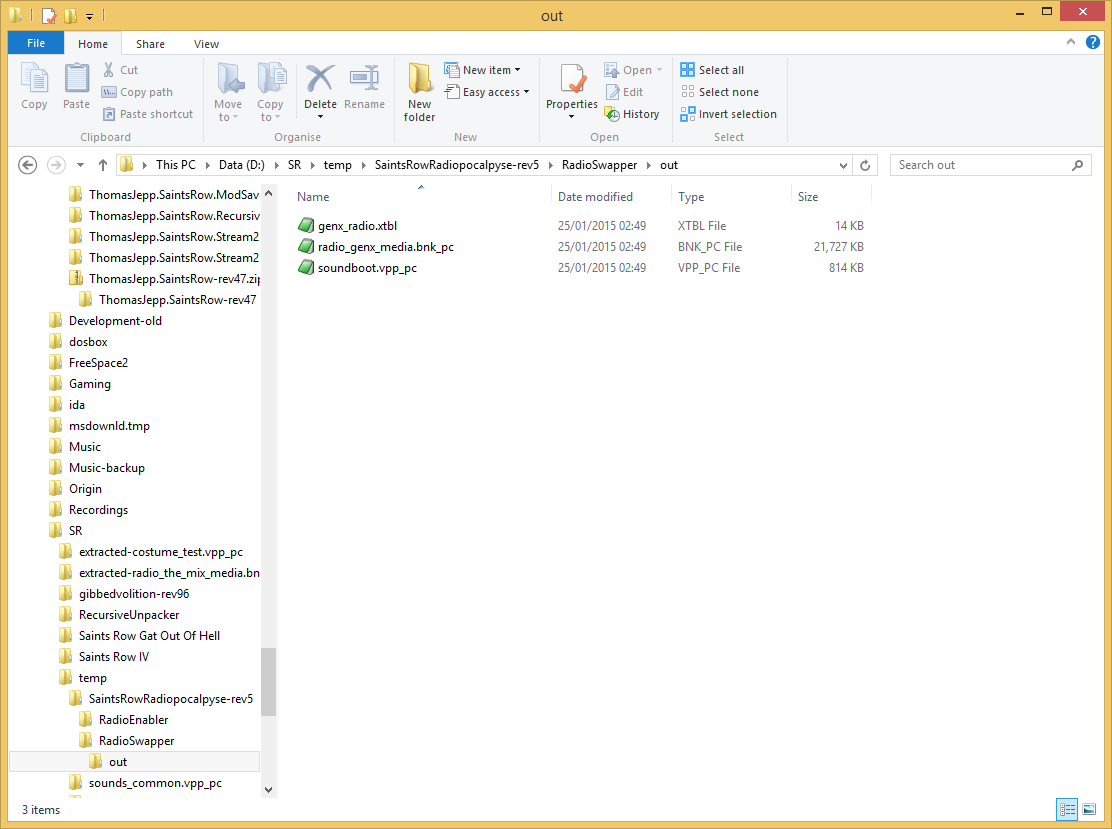 These are the files we'll need for Saints Row: Gat Out Of Hell to play our new music.

4. Load the new sound files into Gat Out Of Hell

Once you've done that, the folder should look like: 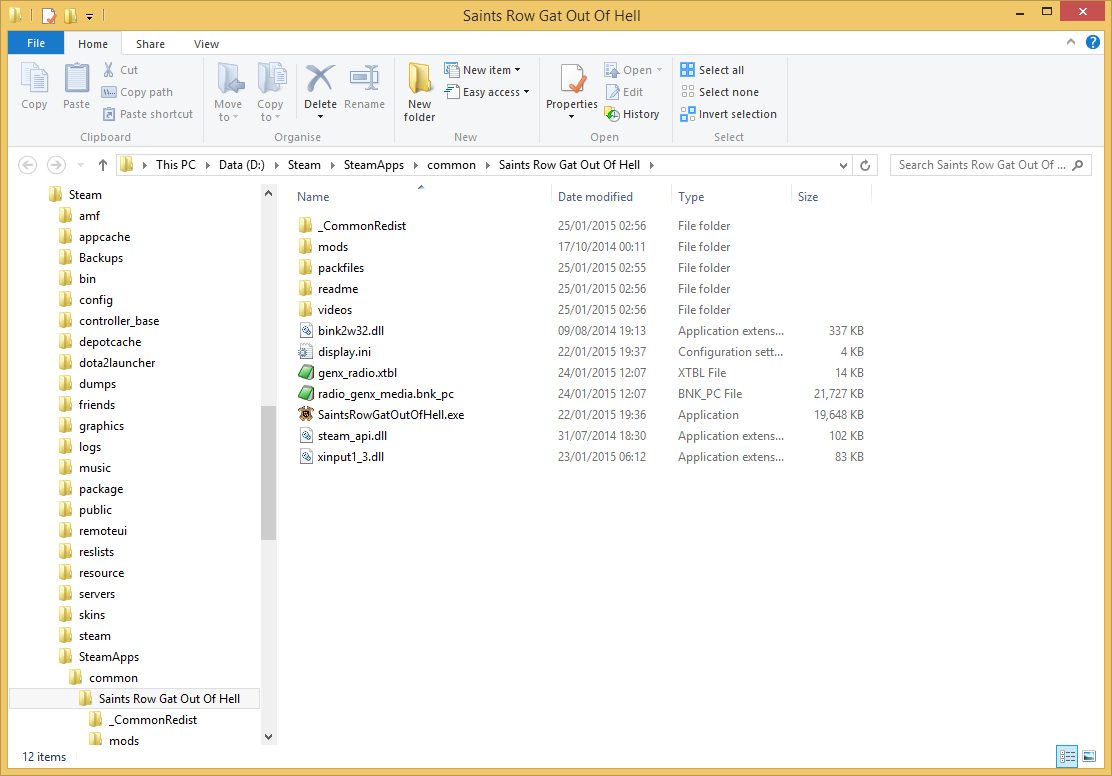 Overwrite the "soundboot.vpp_pc" that is already there. 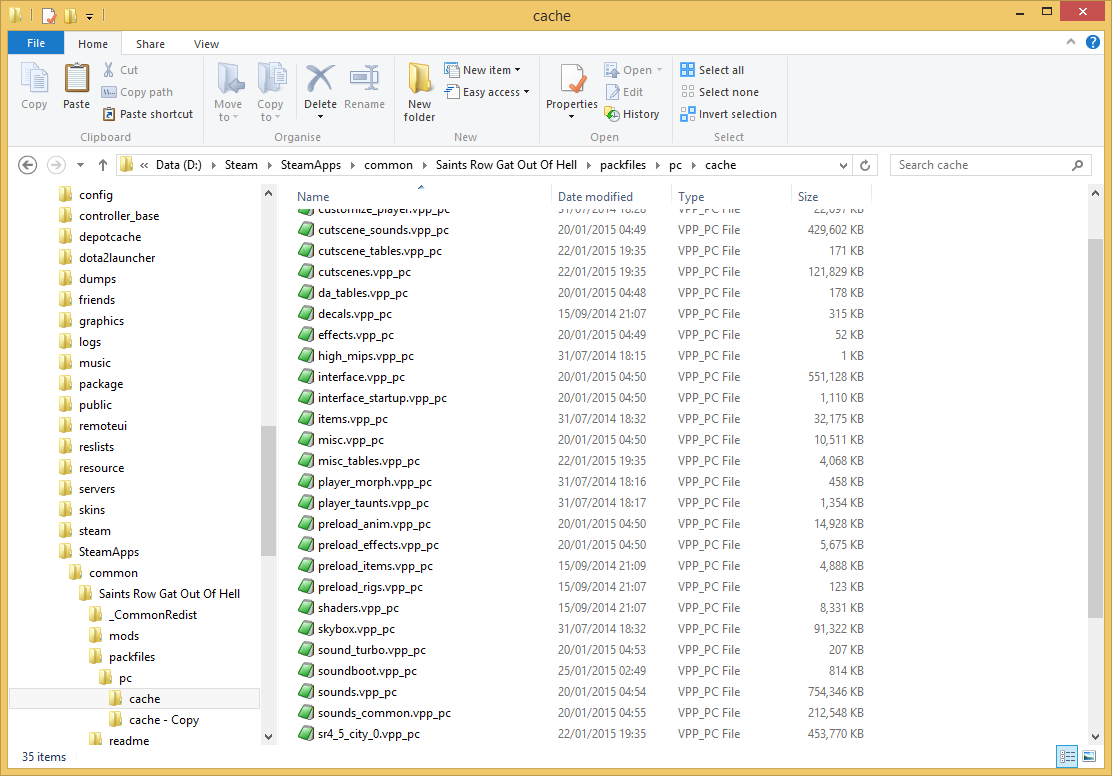 You're done! Run Gat Out Of Hell and switch to your radio using , or .!
Last edited: May 8, 2017
Site owner and host
Read the Forum Rules. If you've been banned and you feel it was unjustified, e-mail me.
If you have a question or need help, please do not PM me - post it publicly in the forum so that others may help and so that others may benefit.

Hmm i may not have done it correctly but all sound has disappeared from my game, i found that all the audio settings where set to 0 but even after turning them up i still can't hear anything.
I will give it another go and see if it works.

Nevemind i forgot i still had my soundboot file from when i tried copying audio over from saints row iv, it works properly now.(Now i can go around hell listening to Safety Dance )
Also you can't use , or . when in the Armchair-A-Geddon
Last edited: Jan 25, 2015
Check me out on Steam: Zopiahh
View my mods by visiting my profile: Zopiahh

Volition Staff
Things are about to get incredibly easier with being able to use your own mp3s. It's an incredibly simple process with browsing to your local music files for each track, clicking build, and then moving the files over. Minimaul is the king.
"Straight up in your face, blow the roof off the place"
Check out my site for Saints Row modding news and Gentlemen of the Row/Steelport downloads
M

When I press build on Radio Swapper it gives me a message that says," Unable to locate your Saints Row: Gat Out Of Hell." Any ideas on how I can fix this?

Mr. Negi Gen 3 said:
When I press build on Radio Swapper it gives me a message that says," Unable to locate your Saints Row: Gat Out Of Hell." Any ideas on how I can fix this?
Click to expand...

Where is your game installed?
Check me out on Steam: Zopiahh
View my mods by visiting my profile: Zopiahh
M

Erza Scarlet said:
Where is your game installed?
Click to expand...

That seems to be a pirated version of Saints Row which isn't supported here.
Check me out on Steam: Zopiahh
View my mods by visiting my profile: Zopiahh
M

Erza Scarlet said:
That seems to be a pirated version of Saints Row which isn't supported here.
Click to expand...

alright then thanks anyways, i do plan on purchasing it in the near future though.

Erza Scarlet said:
Also you can't use , or . when in the Armchair-A-Geddon
Click to expand...

I actually found out why this happens by accident - the game actually disables checking radio input while you're in that chair. Mad!
Site owner and host
Read the Forum Rules. If you've been banned and you feel it was unjustified, e-mail me.
If you have a question or need help, please do not PM me - post it publicly in the forum so that others may help and so that others may benefit.

I cannot seem to extract the '_media.bnk_pc' files, the command prompt comes up for one second and that's it.