Even though I don't agree with Anita Sarkeesian's take on the series, Jaros does admit some mistakes when it came to women and sex workers in previous games.
Click to expand...

Thanks, interesting read. Although I'm not sure why Steve is so ashamed of the Brotherhood questline, there's nothing portraying women in a negative way here. It's purely about revenge, things would have played out the same if Jessica had been a guy.
♪ I'm born to lose and destined to fail ♪

How do I know if I got the two DJ helmets? I shared my Johnny Gat character on Facebook... But the site has not told me if I got the helmets or not.
"I'm curious if you can keep your cavalier attitude when 2000 volts are running through your body."

3rdStreetSaint 212 said:
How do I know if I got the two DJ helmets? I shared my Johnny Gat character on Facebook... But the site has not told me if I got the helmets or not.
Click to expand...

Go to https://bossfactory.saintsrow.com/ and check if "gallery" has the 2 helmets as a background
Please don't send me mod requests.
Twitter | Steam Workshop | Patreon | YouTube 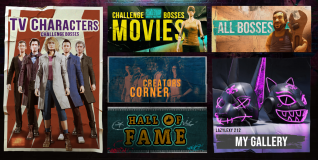 This?
"I'm curious if you can keep your cavalier attitude when 2000 volts are running through your body."

Then you got it. If you see the art of 2 helmets it means you redeemed them
Please don't send me mod requests.
Twitter | Steam Workshop | Patreon | YouTube
V

But no one answered my question: are there any other homies called via the phone / UI beside those three?!?
Last edited by a moderator: Aug 5, 2022
V

Also, I found a video from July 21st, which seems hasn't been posted here - it shows gameplay from (probably) Saints Row's final version (quality goes up to 4K 60FPS). I checked the few thread's previous pages and I didn't found this posted:


Also, on minimap radar the police shields (showing the police notoriety level) seems to be modified version to ones from Saints Row The Third...
Last edited: Aug 5, 2022

1. They're listed Windows 10 and newer as minimum... For those still using Windows 7 or Windows 8.1 - NO support at all for those OSes, sorry! (This leaves Agents of Mayhem the last Volition's game that supports Windows 7.) There's isn't any Linux / Ubuntu version, neither;
2. Also they only listed GPU with 4 GB VRAM or above - this means anyone using PC with videocard with only 2 GB VRAM will not be able to run the game, even on minimal graphic settings!

Interesting is, the game seems has pretty low CPU requirements, but slightly high for the GPU... Also HDD required free space is only slightly higher than Agents of Mayhem's one that was around 40-45 GB...
Last edited: Aug 8, 2022
You must log in or register to reply here.
Share:
Facebook Twitter Reddit Tumblr Email Link
Top