Arthur Hansen said:
Didn't that get canned recently? Or at least seriously delayed?
Click to expand...

If you're talking about VtMB2, yes, it's most likely in development hell rn.

Arthur Hansen said:
And there are some stinkers in Vampire the Masquerade stories/lore. Sam Haight is... really shitty.
Click to expand...

I played VtMB and VtMR, but it was a long time ago. Who's that exactly?
♪ I'm born to lose and destined to fail ♪

TheBlueGuys said:
Is it any different from when Walter Wright got into the drug business to pay off his chemotherapy bills?
Click to expand...

Breaking Bad is also a generational trendsetter who's talent calibre comes infrequently, which definately not everyone can and will get.

Like I get what they were going for. The street gangsters of the 2000's are not as cool as they used to be and now younger people look up to "Self-Made" "Hustlers" who peddle platitudes while defrauding their followers of money through get-rich-quick courses and pyramid schemes. That plus the "Marvel dialogue" that was likely stylish and fun when this game was first being conceived but has gotten stale by launch-time.
Last edited: Sep 4, 2022

L'Andromada said:
If you're talking about VtMB2, yes, it's most likely in development hell rn.

I played VtMB and VtMR, but it was a long time ago. Who's that exactly?
Click to expand...

Developers pet character from the dice book. He literally was everything and so broken that they wrote him out of continuity by have reality hate him so much he imploded into his own inescapable dimensional prison fatally.

My honest opinion is that the game was passable, which is a shame. I wish they did more with the story and they did more to make the side activities more fun. They aren't. They are very general and there is way to much fetching.

I wish they focused the story on how the boss meets Neenah, Kevin and Eli instead of having them already be friends. I think it would've been better if the Boss was part of the Marshalls for a longer set of time. Just spitballing, but imagine if the boss was already part of the Mashalls for a while, maybe even a higher rank. Or maybe you start out as a rook, but your actions make you grow through the ranks faster, causing more competition with Gwen, which could be a fun thing to explore. There are 3 gangs ruining Santos Ileso and a bit like now, Neenah, Kevin and Eli are eacht part of one of the gangs.

In your missions to uphold peace (and abuse your power as a PMC) you meet the three, and every mission, you help eachother out. Starting a friendship individually. Then the boss brings the other three together and they find a liking to eachother. So the Marshalls in the meantime are getting more brute and start to blame stuff on the boss, like the failure of their missions. They are also needlessly brute against other gangs, bringing the Boss, Neenah, Kevin and Eli on the idea to bring all gangs together.

So they start to work towards that goal, but things fall apart, the gangs betray the three friends and the Marshalls betray the boss. So then they decide to start their own gang, the Saints (with a little joke that one of them heard the name somewhere before, but couldnt place it, leaving it open to a crossover when the series start to get more crazy) and they can finally start some work, unlocking the last of the missions to take over the city.

Anyway, what I'm trying to say is, the story was very generic, could've used much more work. The sidemissions were mostly boring. The bugs destroy the game, I can't play coop because of many bugs. And I have no motivation to 100% this game, something I had with Saints Row 2, 3 and 4. I do wish they will return to their edgy, over the top humor. That they will parody other games and point out their ridiculousness while being ridiculous themselves. That they come with more fun activities. Bring back Fight Club, more transporting missions, racing, Fuzz, Crowd Controll... I mean, they have so many examples from their previous games, there is no excuse for this game to be an average open world game. Even Far Cry 6, the most basic open world game from UBI feels more fun. Which is a damn shame.
Remember the past, focus on the future, live now... 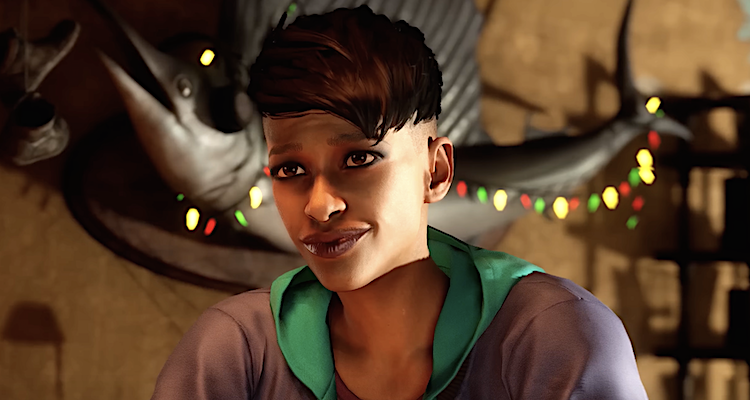 The Saints Row reboot has reportedly seen an 80% drop in physical sales in the UK the week after it launched, tumbling down the charts.

SHADOWSAINT303 said:
So with a REBOOT obvisly comes with changes, some good some bad. The puckish rogue saints we know and loved are gone and in comes a new youthful hipster esque group of misfits and gangsters. With The Boss having previous military or private militia training (or whatever it was), how does this make you feel. OG BOSS from sr1 was just a random guy caught up in the wrong place at the wrong time, got the s**t beat outta him then was part of the gang. The three other founders of the saints were part of other gangs.

Basically what I want to know is how do you feel about the toned down nature of The REBOOT. No more di**o bats, or anything of that nature. DO you think if the reboot had elements of previous saints row games it would automatically be favored over the reboot theme or do you think Volition is making a good move toning it down and giving a new setting and new characters.

MY FEELINGS:
1) We can all be relived that they basically retconned gat outta hell and 4 as a fever dream and be relieved we dont have another game dealing with alien invasions
2) While I'm seriously going to miss the OG saints, I think not including them in a REBOOT is a good idea. In the age of Marvel Movies dealing with alternate Universes and Different Realities, We can treat this exactly the same, While its not quite the same (characters having different names etc), we can think of it as a alternate reality for the saints. Kinda a WHAT IF episode if you will. WHAT IF- The Third Street Saints Never existed.
3) I love the inclusivity. Seeing prostetics in a game that ISN'T added through mods is AMAZING. I am lucky and have my limbs intact but, what if your a military vet and you LOVE to play video games and you LOVE to attempt to make a accurate version of your self but find you cant because you havea prostetic leg becuase you lost yours in the war. ( This is not me trying to be insensitive to anyone who has prostetics, please don't take it that way). I love the new options they added, partial nudity in vanilla is something untill recently anyone would have thought about doing(aside from CYBERPUNK 2077, I cant think of a vanilla game that had a nudity option), The unlocked gender customization options and any voice for any gender is so cool. ( Granted all sr have had that option)
4) New city. Look we all loved steelport and steelwater but lets be real, after seeing the same city for 2 games, a change in scenery is VERY welcome in my opinion.
5) EVERY CAR AND VEHICLE HAS CUSTOMIZATION. Need I say more?
6) GUNS AND WEAPONS. 2 words. FUCKING KEYBLADE. Those who know, know. Also I spotted a katana in one of the trailers, gun apperence customization, change the look, etc.
7) Abilities (not super powers). Wingsuit, eejecto seato cuz, and more im sure(I cant remember off the top of my head what they were)
8) BE WHO YOU WANNA BE.

Thank you all for reading I know its long but hopefully it gives you a different perspetive to look at
Click to expand...

I understand the direction they were going (kinda), time for a change. It was only so many scenarios they could have made with the OG Saints anyway so I see what they were doing. I’m all for changes, but there’s just some things they should have left alone, like the recruiting process: Now it’s only our contacts that can follow you and may or may not be busy rather than someone waiting on command, not only that but there’s so many diverse unique styles that just go to waste because of it now. I love this new reboot don’t get me wrong, but that was one of the key fragments of the series, you take away the full use of your army you take away the grind of getting so many of these businesses outfits for them. To shortly answer: I like the Structure background with this new reboot, a chance to make new history while The OGs go on in the history books, but I don’t like some of the new changes. If (God hear my prayers) they do fix some of these things in a patch with the release of one of these expansion packs then I think the game would be more fun, but as of right now even with the fresh new backgrounds I feel like I wasted $100 on the platinum bundle.

OneVision said:
Yeah, about that

The Saints Row reboot has reportedly seen an 80% drop in physical sales in the UK the week after it launched, tumbling down the charts.

People really don't buy physical copies much these days. So that was probably more of getting it out to be looked at.

Arthur Hansen said:
People really don't buy physical copies much these days. So that was probably more of getting it out to be looked at.
Click to expand...

We can only hope this isn't the final nail in the coffin for Volition. AoM was a disappointment, and AoM is looking to go that way as well.